Hillary Clinton and the Clinton Foundation could very well be connected to a known child abduction ring!

Earlier today a Reddit user released a host of connected WikiLeaks emails from Hillary Clinton that connects the Clinton Foundation to a child trafficking ring in Haiti after the disastrous earthquake.

Laura Silsby was the former director of The New Life Children’s Refuge that was stopped at the Haitian and Dominican Republic border with 33 children that they claimed were all orphans. None of the children had any kind of paperwork or documentation necessary for crossing borders or identification. Silsby and her cohorts tried to say that they were taking the children to set up an orphanage.

After authorities investigated they realized that none of these children were orphans and that Silsby and her accomplices had stolen them during the chaos after the earthquake.

The story starts to get interesting after the Clinton Foundation helped Silsby and her accomplices out of trouble with the law on the means that they were doing “missionary” work.

The lawyer that represented Silsby and her accomplices was none other than a convicted human trafficker himself, one Jorge Puello Torres.

The story gets even more interesting after Huma Abedin emailed Hillary Clinton directly several times regarding Silsby and the “missionaries” that were arrested in Haiti.

There are also plans for the amount of money that it would cost to house the children from another released email titled “After the wheels are off the ground.”

Hillary Clinton and Huma Abedin’s extreme interest and following of the incident are suspicious enough but the fact that the Clinton Foundation helped them get off by pressuring the authorities also points to them trying to cover their butts.

Hillary Clinton and Bill Clinton may very well be even worse than they already were known to be.

Read the full thread and emails here from the discoverer PleadingtheYiff. 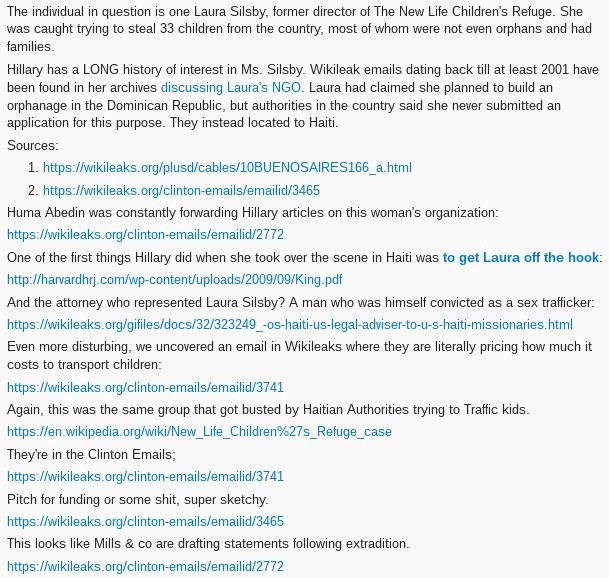 Learn more about this and all of the ways to connect to Tsiyon Radio here.