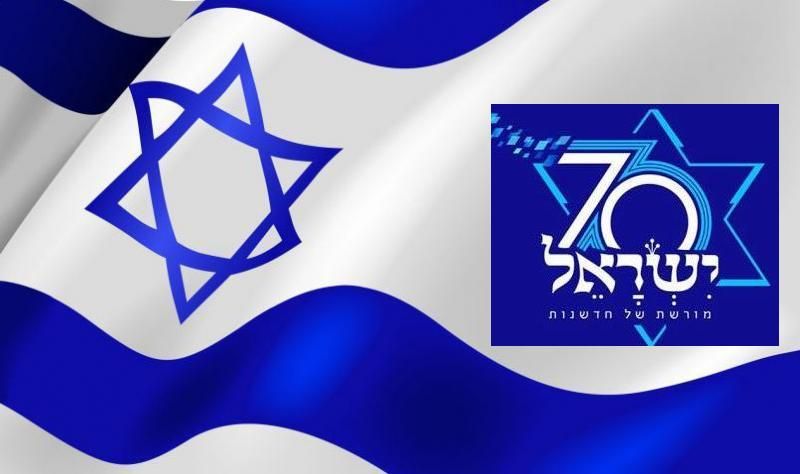 US President Donald Trump and Queen Elizabeth II were among the well-wishers for Israel’s 70th anniversary celebrated Thursday. Israel’s air force stages aerobatics shows for Independence Day in different parts of the country. The F-35 stealth bomber makes its debut appearance, along with visiting air force participants. At his residence in Jerusalem, President Reuven Rivlin receives 120 outstanding soldiers from different units in the day’s first event. It is followed by the annual International Bible contest. The Israel Prize award ceremony is the closing event. Many people will take advantage of the national holiday to visit army and police sites which are opened to the public, along with outdoor picnics and family gatherings.

Forty ambassadors to the United Nations arrived to take part in the celebrations from Africa, Asia-Pacific, the Caribbean, Europe and Latin America. The diplomats were in the large audience that watched the televised three-hour long spectacle Wednesday night at Mount Herzl in Jerusalem depicting in song, dance and rich pageantry the nation’s history accompanied by music and a brilliant fireworks display.

Prime Minister Binyamin Netanyahu was among the 14 Israelis honored as torch-lighters for outstanding achievements in diverse fields of endeavor.

Veteran general Yashayahu Gavish, who began his military career as an officer in the pre-state Palmach. He shared the honor with Capt. Roy Levy of the elite Egoz, who returned to combat in the 2014 Gaza War after being injured twice.

Racheli Ganot, an ultra-Orthodox woman who established a company which grooms religious women for the job market.

Prof. Marcelle Machluf, who arrived in Israel from Morocco as a child-orphan and developed treatments for cancer during a distinguished medical career.

Noam Gershony, an IDF chopper pilot who was wounded in the Second Lebanon War in 2006 and won gold in the 2012 Paralympics as a tennis champion in a wheelchair.

Ruth Kahanov, Israel’s ambassador to Japan, who lit the torch on behalf of Mashav, the Foreign Ministry’s department for international assistance.

May Korman, a schoolgirl of 15, who invented a gadget for warning parents against forgetting small children in their cars.

Margalit Zinati, whose family has lived continuously in the ancient Galilee town of Peki’in for 2,000 years, for preserving the ancient Jewish presence in the Galilee region.

Dr. Avshalom Kor, a distinguished linguist who is popular for his short radio spots on the correct use of the Hebrew language.

The entertainment world was represented by the popular singer and songwriter Shlomo Artzi, the actress Leah Konig, doyenne of the Habimah national theater, and Ze’ev Revach, a character actor known for his roles in numerous made-in-Israel movies.

In Israel’s Ministry of Economy and Industry contest, the public ranked as the greatest Israeli inventions of all time, the Iron Dome missile-defense system, followed by Waze international navigation, drip irrigation and Disk On Key data storage (Memory Stick.)

See: Darwinian Evolution Junk Science. This series is excellent for every person who has, or may have, someone in their life who has been influenced by Evolution. When your friends consider where this idea of Evolution came from, and the misery and death it has caused, they will be shocked and repulsed by it - and we hope, will want to know the truth about where we all really came from.  Don't miss this series! It will be available to all Tsiyon members at Tsiyon.Net, along with other special content, for a limited time. Sign-up is free, so invite your friends to view this now, during this introductory showing period.